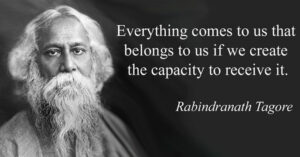 India’s first Nobel laureate who reshaped Bengali literature and music, Rabindranath Tagore was also an educationist who started the Vishwa Bharati University in Shantiniketan, and in the process, challenged conventional mores of education. Rabindranath Tagore’s birth anniversary is also known as Pochise Boishakh 2019.

Here is a list of interesting facts about Shri Tagore:

1. Confusion regarding birthday: According to the Bengali calendar, Tagore was born on the 25th day of Boishakh month, in 1422. Subsequently, West Bengal celebrates Tagore’s birthday as per the Bengali calendar, which overlaps with either May 8 or May 9 on Gregorian calendar. However, in other states, Rabindranath Tagore Jayanti is observed as per the Gregorian calendar on May 7.

2. The painter William Rothenstein was actually a friend of the Tagore family and ran into Rabindranath in 1910. Tagore gave Rothenstein his translations of his own songs—translations that would comprise the Gitanjali—when he travelled to London in 1912.

3. When Tagore was awarded the Nobel Prize for Literature in 1913, he became the first non-European to win it. He was awarded the prize after the publication of his acclaimed collection of poems Geetanjali.

5. In March 2004, the Nobel medal that had been awarded to Rabindranath Tagore was stolen from a museum in the Uttarayan complex in Santiniketan. The Nobel later went on to issue a new medal to Tagore on his birth centenary.

6. Tagore and Gandhi were well acquainted and in fact, it was Tagore who conferred the title ‘Mahatma’ on the father of nation. Tagore and Einstein met four times between 1930 and 1931 and revered each other moved by their mutual curiosity to grasp other’s contributions, their search for truth and love for music.