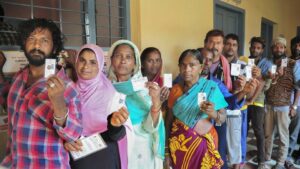 As per Election Commission of India, the 2019 Lok Sabha elections witnessed a voter turnout of 67.10% (interim), which is the highest ever voter turnout in the history of general elections.

The previous highest voter turnout of 66.44% was recorded in 2014. The seven-phase 2019 elections began on April 11 and concluded on May 19, with counting scheduled for Thursday.