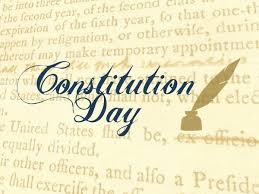 26th November is Constitution Day. On the day in 1949, the constitution was adopted which came into force on January 26, 1950 marking the beginning of a new era in the history of India. From 2015, the Government is observing 26th November as Constitution Day.
The HRD Ministry has launched a Digital Signature campaign to generate awareness on fundamental duties enshrined in the Constitution. People can join the campaign by filling a form online.
Static/Current Takeaway Points Important for IBPS Clerk Mains 2017 Exam-
Minister of Law and Justice- Ravi Shankar Prasad
Dr BR Ambedkar is known as the Father of Indian Constitution.
Source- Press Information Bureau (PIB)