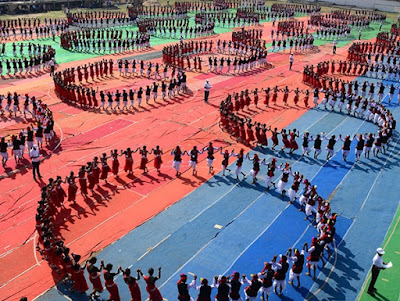 During the recent event in District Mandla,Madhya Pradesh, 3,049 people registered their spot in the Guinness book of world records for performing largest Karma Naach dance ever. The people took part in the dance to celebrate the culture and history of the Gond tribes of central India. Organised by district administration association, the participants formed 61 large circles of 50 people and performed the traditional tribal dance in spectacular synchronicity. In accordance with the Guinness World Records guidelines, the choreographed Karma Naach dance continued for a minimum of five minutes.
All the participants were dressed in traditional clothing to complete the attempt, and the folk dance was accompanied by live music. India has already played host to a multitude of impressive mass participation dances, including the Largest Bollywood dance, which took place in Amritsar in January with 8,726 people. At the Thanima 2015 arts festival in Irinjalakuda, 5,211 dancers set a new record for the Largest Kaikottikali dance in front of a captivated audience of over 55,000.

So let’s do:
1. Madhya Pradesh, ________ registered their spot in the Guinness book of world records for performing largest Karma Naach dance ever.