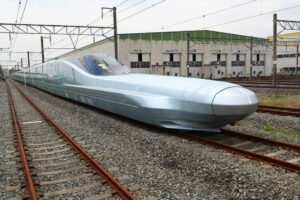 Japan has started testing its fastest-ever bullet train capable of reaching 400 kilometers per hour (249 mph) as it continues to develop the revolutionary mode of travel. The ALFA-X version of the Shinkansen train began three years’ worth of test runs.

Once it enters operation around 2030, it will run at speeds of up to 360 kph (224 mph), comfortably making it the world’s fastest bullet train. It will also outpace China’s Fuxing train, which runs at 10 kph slower despite being designed with the same top speed capabilities as the ALFA-X.