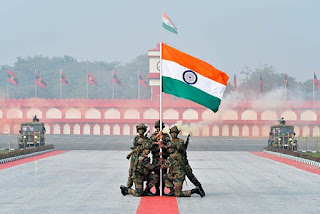 69th Army Day is being observed today (15th January 2017). The day marks the taking over of the Indian Army by the first Indian Commander-in-Chief, Field Marshal KM Cariappa, on January 15, 1948. He took over the reins of the Army from Lieutenant General Sir Francis Butcher, the last British Commander-in-Chief and became the first Commander-in-Chief of the independent India.
The day is celebrated to pay homage and salute to the courageous and brave Indian soldiers who have been sacrificing their lives for protecting the country. This day inspires the troops to continue to enrich the glorious traditions of the Indian Army with their dedication and sacrifice. To mark the day, Army Parade will be organised at the Delhi Cantt.