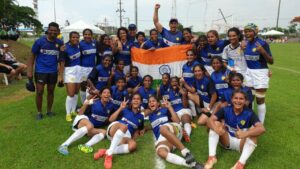 The Indian women’s rugby team have claimed a historic first ever international Rugby 15s victory. They defeated Singapore with a score of 21-19.

The tournament was one of the qualifying rounds for the 2021 Women’s Rugby World Cup to be held in New Zealand.