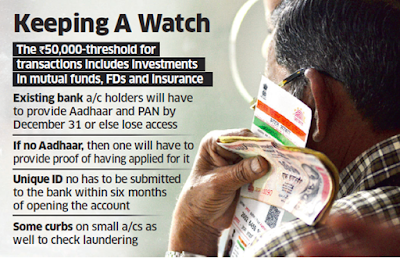 Stepping up its fight against tax evasion, the Centre has made it mandatory to quote the Aadhaar number for opening bank accounts and for transactions exceeding Rs.50,000. With the amendments to the Prevention of Money Laundering (Maintenance of Records) Rules, 2005 notified earlier this month, banks will have to demand both Aadhaar and the Permanent Account Number (PAN) for verification of identity, starting June 1.
By the Finance Act, 2017, the Government had made it mandatory to seed PAN with Aadhaar and quote it in income-tax returns. However, the Supreme Court had held that only those individuals who possess an Aadhaar card need to link it with PAN. The new rules mandate existing bank account-holders to provide their Aadhaar details by December 31, while new applicants will be expected to quote either the 12-digit number or offer proof that they have applied for Aadhaar enrolment.
Important Takeaways from Above News-
Source- The Hindu Business Line