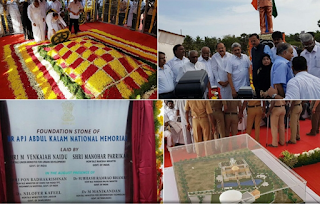 To mark the first death anniversary of former President Dr. A.P.J. Abdul Kalam, the foundation stone for National memorial of Dr. Kalam was laid at Peikarumbu in Rameswaram (Tamil Nadu). Also, a life-size statue and a 3-D model of the memorial of the ‘Missile man of India’ were unveiled by Union Minister Venkaiah Naidu and Manohar Parrikar.

An exhibition named ‘Mission of Life’ depicting the life of Dr. Kalam and his achievements towards nation building was also inaugurated. The event was attended by a host of dignitaries. Avul Pakir Jainulabdeen “A. P. J.” Abdul Kalam was the 11th President of India from 2002 to 2007. A career scientist turned politician, Kalam was born and raised in Rameswaram, Tamil Nadu, and studied physics and aerospace engineering.

So let’s do:
1. Name the persons, who have unveiled a life-size statue of Dr APJ Abdul Kalam at Peikarumbu?