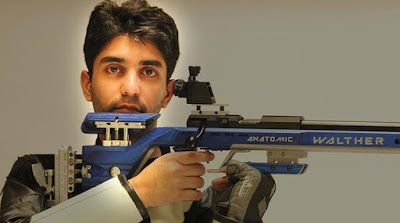 Abhinav Bindra, India’s lone individual Olympic gold medallist, has officially announced his retirement from shooting. A near second Olympic medal was missed by a whisker at the recently-concluded Rio Olympics 2016 and even if he felt gutted, Bindra was not ready to show it in front of his country’s media.
Abhinav Bindra (born 28 September 1982, in Dehradun,Uttarakhand, India is an Indian professional shooter and businessman and is a World and Olympic champion in the 10 m Air Rifle event. By winning the gold in the 10 m Air Rifle event at the 2008 Beijing Olympic Games, he became the first Indian to win an individual gold medal at the Olympic Games.
So let’s do:
1. Name the Indian shooter, who has officially announced his retirement?