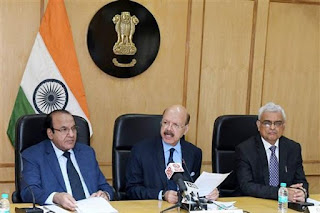 Achal Kumar Joti has been appointed as the next Chief Election Commissioner, the Law Ministry informed. Chief Election Commissioner Nasim Zaidi is demitting office later this week. Mr Joti, the former Chief Secretary of Gujarat, assumed the role of Election Commissioner in May 2015. Born on January 23, 1953, Mr Joti will have a tenure of less than 10 months as ECs demit office at the age of 65.
Mr Joti is a 1975-batch Indian Administrative Service (IAS) officer who retired as Gujarat Chief Secretary in January 2013. He served in the top bureaucratic post of the State when Prime Minister Narendra Modi was Chief Minister. Mr Joti (62) has also served as the State Vigilance Commissioner and worked in various capacities in his cadre including as Chairman of the Kandla Port Trust between 1999 and 2004 and Managing Director of the Sardar Sarovar Narmada Nigam Ltd (SSNNL).

Important Takeaways from the above News-
Source- The Hindu