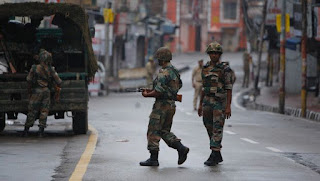 Entire Nagaland has been declared as “disturbed area” for six more months under the Armed Forces (Special Powers) Act (AFSPA), which empowers security forces to conduct operations anywhere without any prior notice. In a gazette notification, the home ministry stated it is of the opinion that the area comprising the whole of Nagaland is in such a “disturbed and dangerous condition” that the use of armed forces in aid of the civil power is necessary.


Now, therefore, in exercise of the powers conferred by Section 3 of the Armed Forces (Special Powers) Act, 1958, the central government hereby declares that whole of the said state to be a ‘disturbed area’ for a period of six months with effect from 30th June 2017 for the purpose of that Act.
Important Takeaways from the above News-
Source- Hindustan Times

More States in News is Here