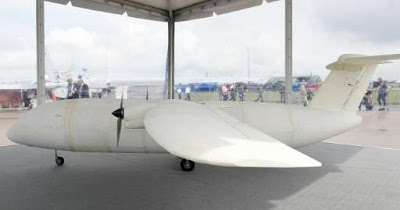 Aerospace company Airbus has displayed the world’s first 3D-printed aircraft THOR at the International Aerospace Exhibition in Schoenefe. The drone THOR is short for Test of High-tech Objectives in Reality and it resembles a large, white model airplane.
THOR Is the world’s first 3D-printed aircraft with just 3 parts. It is windowless, weighs 21-kilo grams (46 pounds) and less than four metres (13 feet) long. It is Lighter, faster and cheaper. Except the electrical elements, all other parts are printed (3D) from a substance called polyamide.

The new 3D printers can make pieces up to 40 centimetres (15 inches) long and is of most use in particularly complex designs. Apart from costs savings, 3D printing also promises ecological benefits as lighter jets use less fuel and spew out fewer pollutants. It will be a radical technical innovation to reducing carbon emissions in aviation with air traffic expected to double in the next 20 years.

So let’s do:
1. Name the Aerospace company, Which has present the world’s first 3D-printed aircraft THOR at the International Aerospace Exhibition?