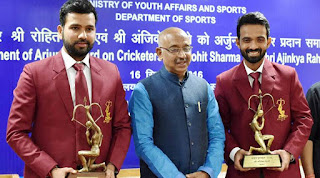 Sports Minister Vijay Goel conferred Arjuna Awards on cricketers Rohit Sharma and Ajinkya Rahane at a function in New Delhi. Sharma was given the award for 2015 and Rahane for 2016.
Rahane and Rohit, who have been named in the Indian team for the three-Test series against New Zealand, beginning on September 22, were honoured with the Arjuna Awards at a function held at the Jawaharlal Nehru Stadium. The Arjuna Awards are given by the Ministry of Youth Affairs and Sports, the government of India to recognize outstanding achievement in National sports.

So let’s discuss some questions related to this post:
1. Name the cricketer, who have been conferred with Arjuna Award?
2. Who is the Union Sports Minister?