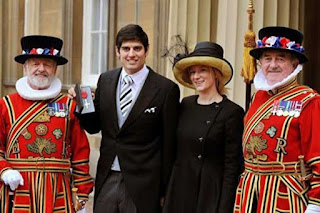 England Test captain Alastair Cook has been honoured with Commander of the Most Excellent Order of the British Empire (CBE). He was awarded the CBE at the Buckingham Palace by Prince Charles.
Cook is the only England player to have scored over 10,000 runs in Tests and has also led England in the most number of Tests. Cook said, receiving the CBE was a very proud moment for him, his family and friends.
Source- The Instagram