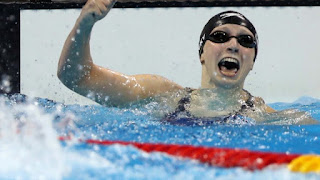 American swimming star Katie Ledecky smashed her own world record at the 400 meters freestyle event at the Rio Olympic Games. The 19-year-old swimmer touched the wall in a time of 3 minutes 56.46 seconds, knocking nearly 2 seconds off the record to earn her first gold medal of the 2016 Summer Games.

Adam Peaty of Britain also set a world record for the men’s 100 meters breaststroke with a time of 57.13 seconds to win gold. The U.S. men’s swimming team won a gold medal in the 4×100 relay. Michael Phelps, who gave the team the lead swimming a fast third leg, earned his 19th gold medal as the most decorated athlete in Olympic history. Americans regained the title in the event after the French took gold in 2012 in London.  France came in second.

So let’s do:
1. Name the Swimmer, who has won gold in women’s 400 freestyle event at the Rio Olympic Games?