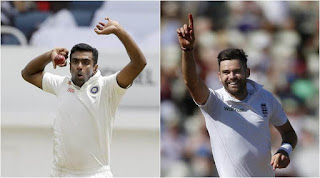 In the latest MRF player Rankings for Test Bowlers England Speedster James Anderson has topped the list. The English cricketer replaces India off Spinner Ravichandran Ashwin. The James Anderson has reached his career best by claiming the top position month back in May 31. The race was among Ashwin, Pakistani bowler Yasir Shah and Anderson.
Anderson plays first-class cricket for Lancashire and since arriving on the international scene in 2002/03 has represented England in 100 Test matches and nearly 200 One Day Internationals. He is England’s all-time highest international wicket-taker when combined across all three formats, being the country’s leading wicket taker in Test match and One-Day cricket.

So let’s do:
1. Name the cricketer, who has placed topped in latest MRF player Rankings for Test Bowlers?