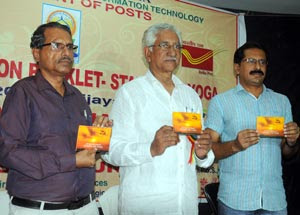 To commemorate the 2nd International Day of Yoga, Andhra Pradesh Postal circle on 21 June 2016 released “Information booklet, Stamps on Yoga” and “12 stamps on Suryanamaskarams”. The booklet contains illustrations and description of 24 yoga asana (postures). It also provides a brief description on the various Yoga postures depicted in the original Stamps.
The booklet contains four Commemorative stamps released in 1991 on various yoga postures – Bhujangasana, Dhanurasana, Ushtrasana and Utthita Trikonasana. The booklet and stamps were released to encourage customers and employees to take to yoga. He said the special stamps are limited edition collection which will interest philatelists.

So let’s do:
1. Name the state, which has released stamps on Yoga booklet?