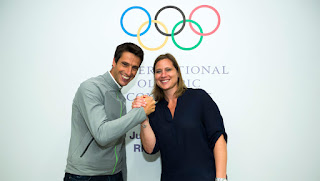 American Ice hockey Olympic champion Angela Ruggiero has been elected as the new chair of the International Olympic Committee (IOC) Athletes’ Commission, replacing the outgoing Claudia Bokel and citing tackling “doping” as her priority over the next two years.

Ruggiero, a former U.S. national defenseman, was a four-time Winter Olympic Games medalist, capturing one gold, two silvers and one bronze during her tenure with the red, white and blue. After previously serving as the vice chair of the Athletes’ Commission—which acts as the voice for Olympic athletes within the IOC—Ruggiero is now set to replace current chair Claudia Bokel following the conclusion of the Rio Games later this month.

So let’s do:
1. Name the person, who has been elected as the new chair of the International Olympic Committee (IOC) Athletes’ Commission?