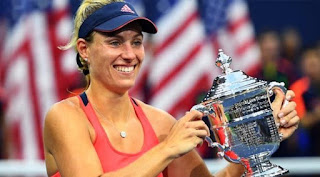 Angelique Kerber won her first U.S. Open title and the 2nd Grand Slam trophy of her breakthrough season. The German defeated Karolina Pliskova 6-3, 4-6, 6-4 on Saturday. Kerber made her debut at No. 1 in WTA rankings, Monday, ending Serena Williams’ record-tying 186-week stay at the top.
Angelique Kerber is a German professional tennis player. Having made her professional debut in 2003, Kerber rose to prominence upon reaching the semifinals of the 2011 US Open, at which time she was ranked no. 92 in the world.
So let’s discuss some questions related to this post:
1. Name the Tennis player, who has won the US Open Tennis tournament?
Source – The Hindu