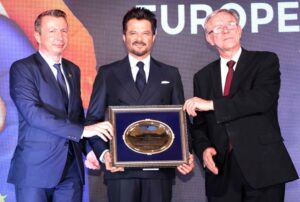 Anil Kapoor was felicitated by Council of European Chambers of Commerce in India and a European Union delegation in Mumbai. He was awarded because of his continuous support in promoting the cause of children’s rights.

The event also marked the celebration of EU Day 2019 on 17th May. Anil Kapoor, who has been working in collaboration with Plan India, a child rights organisation, was the guest of honour at the event.