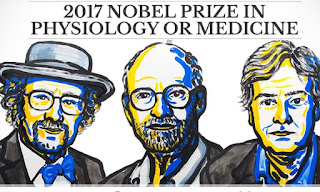 The Nobel Assembly at Karolinska Institutet has decided to award the 2017 Nobel Prize in Physiology or Medicine jointly to the American trio of Jeffrey C. Hall, Michael Rosbash and Michael W. Young for their discoveries of molecular mechanisms controlling the circadian rhythm. All three winners are from the US.
It is the 108th time the prize has been awarded and was announced at the Nobel Forum at the Karolinska Institute in Stockholm, Sweden. The winners will share a prize of 9m Swedish kronor (£825,000), and each receives a medal engraved with their name.
Must Important Takeaways from the Above News:


Announcements Coming Up of Nobel Prize 2017:

Keep with us for more Updates about Nobel Prize 2017………