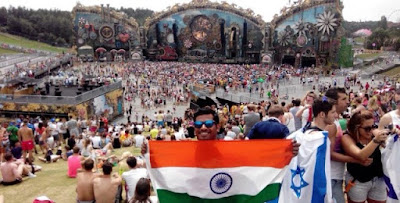 The biggest party in the world, the Tomorrowland, is coming to Israel for the first time. The electronic dance and music company is known for its crazy set ups and a great atmosphere, the Payis Arena in Jerusalem will turn into a magical place with local and international artists behind the scene.
For one special evening Israel will be joined with a live video connection from Tomorrowland in Belgium to celebrate togetherness and unity along with Mexico, India, Japan, Colombia, Germany and South Africa. One of a number held in the world, the international electronic dance fest is leaving its Belgian borders and expanding to and Israel. Started in 2005, the 2016 global event is called, UNITE – The Mirror to Tomorrowland.

So let’s do:
1. Annual electronic music festival Tomorrowland begins in _______.