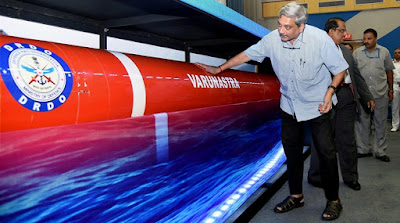 Indigenously-built heavyweight anti-submarine torpedo Varunastra has been successfully inducted in the navy, making India one of the eight countries to have the capability to design and build such a system.

Developed by Naval Science and Technological Laboratory (NSTL), a premier laboratory of DRDO, the electric torpedo was today formally handed over to Indian Navy and the induction is set to be a “game-changer” boost for it. Defence Minister Manohar Parrikar said the programme is not only a boost to country’s indigenous capability but also an opportunity for export to other countries. Having almost 95 per cent indigenous content, Varunastra, costing about Rs 10-12 crore per unit, is capable of targeting quiet and stealthy submarines, both in deep and littoral waters in intense counter-measure environment.
So let’s do:
1. Name the anti-submarine missile, which has been successfully inducted in the navy, recently?
2. Who is the Defence miinister of India?