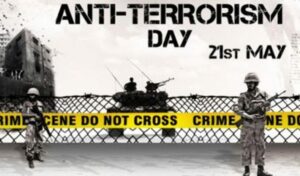 May 21 is chosen as Anti-terrorism day in India to commemorate the death Anniversary of former Prime Minister Rajiv Gandhi died in a terrorist attack.

On this day Anti Terrorism pledge is taken in all the government offices and other public institutions. He served as the prime minister from 1984 to 1989.