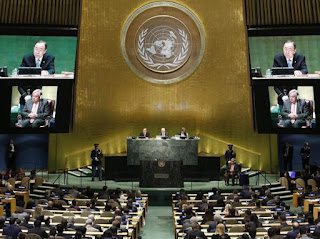 The 193 member states of the General Assembly adopted the resolution by acclamation, appointing 67-year-old Mr. Guterres as the 9th U.N. Secretary-General to take over from Ban Ki-moon, whose tenure will end on December 31, 2016.
Mr. Guterres, who was Prime Minister of Portugal from 1995 to 2002, and the U.N. High Commissioner for Refugees from June 2005 to December 2015, will assume his new role on January 1, 2017 for a 5 years term.

So let’s discuss some questions related to this post:
Q1. How many member countries are  in the United Nation?
Q2. Who has been appointed as the next-Secretary-General of the UN?