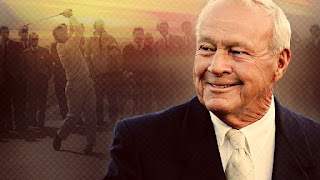 Arnold Palmer, who is regarded as one of the greatest golfers of all time has died at the age of 87 in Pittsburgh from complications of heart problems.
From 1958 through 1964, Palmer was the charismatic face of professional golf and one of its dominant players.  Arnold Daniel Palmer was an American professional golfer. He won numerous events on both the PGA Tour and Champions Tour, dating back to 1955

So let’s discuss some questions related to this post:
1. Arnold Palmer was known for which sport?