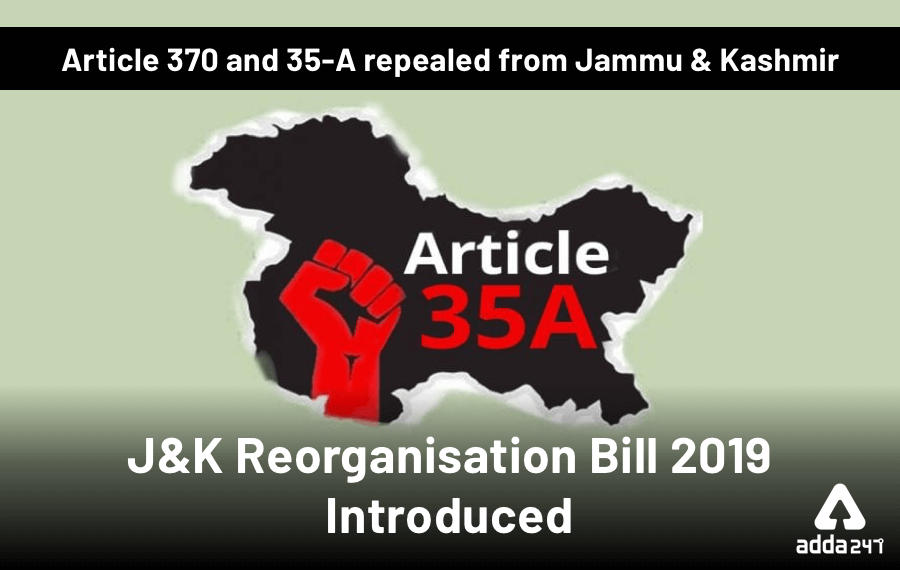 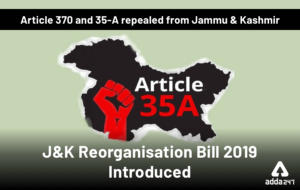 A series of historical decisions which includes the scrapping of Article 370 & Art-35-A and the introduction of “J&K Reorganisation Bill 2019” were taken today during the session of Rajya Sabha. Article 370 was providing special autonomous status to the Indian state “Jammu & Kashmir” which will be no longer applicable from today. The Constitution (Application to Jammu & Kashmir) Order 2019 made by Indian President Ram Nath Kovind was published. Once this order was tabled by the home minister, it came into force immediately and supersede the Constitution (Application to Jammu & Kashmir) Order 1954. All the provisions related to the state of Jammu & Kashmir mentioned in the order will apply to the state. With the above proceedings, Home Minister moved a resolution in Rajya Sabha that all clauses of Article 370 of the Constitution, which gives special status to Jammu and Kashmir, will not be applicable in the state.

With this, Union Government scrapped article 370 and 35A in J&K and introduced a new bill named “J&K Reorganisation Bill 2019”.

Art -370 and its effects on citizens of India

Article 370 was providing special autonomous status to the Indian state “Jammu & Kashmir”. Now, the government’s decision to revoke article 370 will revoke the special provision which grants power to J&K to have its own constitution. As a result, J&K will have to adhere to the constitution of India much like the rest of the country and people from outside J&K will be able to buy property in the state and settle here.

Let us study about the 2 articles: Article 370 and Article 35-A and the newly introduced bill “J&K Reorganisation Bill 2019”.

Article 370 is an article under part XXI of the Constitution of India. This article was drafted by Sheikh Abdulla in 1947, who was the then prime minister of Jammu & Kashmir. The article deals with the “Temporary, Transitional and Special provisions” and is a temporary provision that commits to providing special autonomous status to the Indian state “Jammu & Kashmir”. According to the article, J&K don’t come under the provisions of the Constitution which apply to all other states. For example: till 1965, J&K was having “Sadr-e-Riyasat” in place of “the Governor” and “Prime Minister” instead of “the Chief Minister”.

Under the purview of this article, parliament can implement only some laws in the state which includes defence, communications, finance, and foreign affairs. For the implementation of other laws, except stated above, parliament needs the state to agree with them. As a result, J&K’s citizens live under a separate umbrella of laws as compared to other Indians. The other laws include those related to fundamental rights, citizenship and ownership of property. Due to this, an emergency can be declared by the central government under the state of war or any external aggression.

Article 35-A provides power to the legislature of Jammu & Kashmir to define the permanent residency in the state. In 1954, Indian President Dr. Rajendra Prasad issued the Constitution (Application to Jammu & Kashmir) Order 1954, under which the Article 35-A was introduced.

Jammu & Kashmir’s constitution was adopted in 1956 and defined the “Permanent Resident” and provide the residents with notable benefits that are only available to them. It defined a permanent resident as someone who was a state subject on May 14, 1954, or who has been a resident of the state for 10 years and has lawfully acquired immovable property.

Article 35-A provides special rights and privileges to the citizens of Jammu and Kashmir and disallows people from outside the state from purchasing any immovable property, acquiring land, applying for government jobs, any type of aid & scholarships and public welfare projects in the state of Jammu and Kashmir.

This is a great decision taken by the government of India to ensure the welfare of the people of Kashmir and India as a whole. This step will help to cure India from terrorism, Army issues among others.