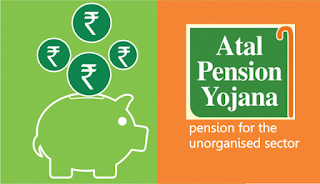 Pension Fund Regulatory and Development Authority (PFRDA) has now introduced “APY@eNPS” which involves a complete digital enrolment process. This is the latest in the series of various initiatives taken by PFRDA for expansion of outreach of Atal Pension Yojana (APY), to give the additional push to cover the as yet unreached population with greater ease. PFRDA has conducted meetings with Banks and Dept of Post at Kolkata, Bengaluru & Mumbai respectively for the earliest roll out of the facility call.
The APY was launched by the Prime Minister of India on 9th May 2015 and became operational from 1st June 2015. APY is available for all citizens of India in the age group of 18-40 years. Under the APY, the subscribers would receive a minimum guaranteed pension of Rs. 1000 per month, Rs. 2000 per month, Rs. 3000 per month, Rs. 4000 per month, Rs. 5000 per month, at the age of 60 years, depending on their contributions, which itself would vary on the age of joining the APY.