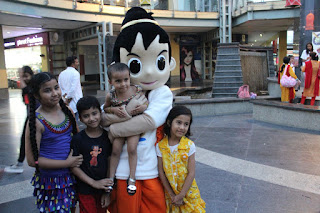 The Central Council for Research in Yoga & Naturopathy (CCRYN)  under the Ministry of AYUSH, Government of India, has initiated a Yoga Awareness Drive through Mascots and Flash Mobs (YogMob) prior to International Yoga Day (21st June) to increase the popularity of Yoga, especially among the youth. The campaign is underway at Delhi NCR, Haryana and Lucknow.
The first such event was held in Rohini area of the National Capital. According to the Ministry, illustrative Yoga sessions with the help of mascots were organised where the Mascots demonstrated a few Yoga asanas to the crowd. The mascots Provide an eye-catching way of helping boost the awareness of International Day Of Yoga. They are connecting with families by providing added entertainment and interactivity, especially at Malls, Public Places, Events & Recreational Tourist Areas.
Static Takeaways from above News-
Source- Press Information Bureau (PIB)