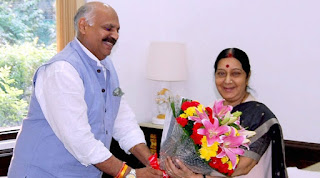 V P Singh Badnore has sworn as the new Punjab Governor and also as Administrator of Chandigarh Administration. Punjab and Haryana High Court Chief Justice S J Vazifdar administered the oath of office and secrecy to Badnore at Punjab Raj Bhawan in Chandigarh.
Badnore, 69, replaces Kaptan Singh Solanki, who is the Governor of Haryana and was holding additional charge of Punjab Governor and Administrator of Chandigarh Administration since January 2015. Badnore, who belongs to Bhilwara, was a four-time BJP legislator in the Rajasthan assembly.

So let’s do:
1. Who is the Governor of Punjab and Chief minister?