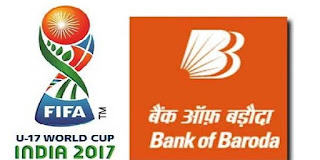 With over 10 months to go for the launch of FIFA Under-17 World Cup India 2017, the Bank of Baroda has become the first Indian company to sign up as a national supporter. The first-ever FIFA event in India, scheduled to kick start in October 2017 will see participation from 24 countries and matches will be played at six different venues. While FIFA already has international sponsors for all events, including Coca-Cola, Adidas, and Wanda, BOB is the first Indian supporter.

So, let’s discuss some questions related to this post:
Q1. Name the bank, which has become the first Indian company to sign up as a National Supporter for the FIFA U-17 World Cup India 2017?
Q2. Which country will host the FIFA Under-17 World Cup 2017?
Answer:1: Bank of Baroda
Answer:2: India
Source – Business Standard