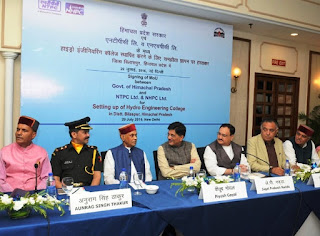 A memorandum of understanding (MoU) was signed today in New Delhi between Himachal Pradesh government, NTPC and NHPC for setting up Hydro Engineering College in the State. This is first of its kind joint venture in the Country. The MoU was signed in the presence of Union Health Minister Sh. J.P. Nadda, Union Minister of State (Power) Sh. Piyush Goyal and HP Transport and Technical Education Minister Sh. G.S. Bali.
This ambitious project with the financial support of NHPC and NTPC would be set up at Bandla in Bilaspur District at the cost of Rs. 125 crores for which both the Corporations have committed to contribute Rs. 37.50 crores each in the first phase and Rs. 25 crores each in the second phase.

So let’s do:
1. Name the state, which has signed a MoU with NTPC and NHPC for setting up Hydro Engineering College in the State?