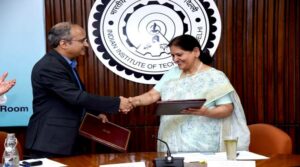 The Bureau of Indian Standards (BIS) has inked an MoU with the Indian Institute of Technology, Delhi (IIT-D) to collaborate in the field of standardisation and conformity assessment. The MoU was signed by IIT Delhi Director Professor V Ramgopal Rao and Director General of BIS Surina Rajan.

According to the MoU, IIT Delhi will provide infrastructure support for research and development projects of relevance to standardisation and BIS will provide financial support to IIT Delhi for projects.

Know All About BIS: