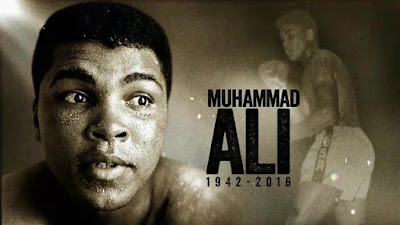 Muhammad Ali, former world magnificent heavyweight boxing champion whose fast fists and irrepressible personality transcended sports and captivated the world, has died. He was 74. Ali had suffered for three decades from Parkinson’s Disease, a progressive neurological condition that slowly robbed him of both his legendary verbal grace and his physical dexterity.

Muhammad Ali born Cassius Marcellus Clay, Jr., January 17, 1942 – June 3, 2016 was an American professional boxer, generally considered among the greatest heavyweights in the history of the sport. Early in his career, Ali was known for being a controversial and polarizing figure both inside and outside the boxing ring.

He was one of the most recognized sports figures of the past 100 years, crowned “Sportsman of the Century” by Sports Illustrated and “Sports Personality of the Century” by the BBC. He also wrote several best-selling books about his career, including The Greatest: My Own Story and The Soul of a Butterfly.

So let’s do:
1. Name the Boxing legend, who has passed away recently ?