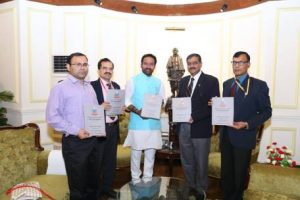 Union Minister of State for Home Affairs G. Kishan Reddy has released the Bureau of Police Research and Development’s flagship publication “Data on Police Organizations” (DoPO 2018) in New Delhi. The Data on Police Organisation in India is an important compilation of information on police infrastructure, manpower and other resources from all States, Union Territories, CAPFs and CPOs.

Major highlights of the DoPO 2018: