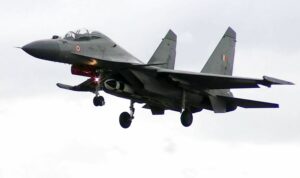 Indian Air Force successfully fired the BrahMos air version missile from its frontline Su-30 MKI fighter aircraft. The launch from the aircraft was smooth and the missile followed the desired trajectory before directly hitting the land target.

The air-launched BrahMos missile is a 2.5-ton supersonic air to surface cruise missile with ranges of close to 300 km, designed and developed by BAPL. Earlier, IAF became the first Air Force in the world to have successfully fired an air-launched 2.8 Mach surface attack missile of this category on a sea target in November 2017.