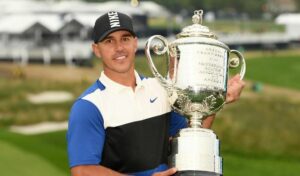 Brooks Koepka (of USA) returned to the top of the world rankings after his nerve-jangling second straight US PGA Championship victory at Bethpage Black. The 29-year-old American has now won four major titles in his last eight starts and is the first man to ever hold back-to-back titles in two majors at the same time.