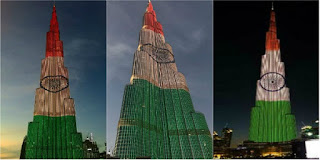 Burj Khalifa tower, the world’s tallest building located in Dubai, has lit up in the colours of the Indian National flag on 25th January 2017 and 26th January 2017 to celebrate India’s 68th Republic Day.
The LED shows were to be held on both days along with complimenting Dubai Fountain shows. In addition to the shows, the Indian Consulate in Dubai has a flag-hoisting ceremony at the consulate premises by Consul General Anurag Bhushan, followed by flag-hoisting at the Indian High School grounds in Oud Metha, Dubai.
Source- The Business Standard