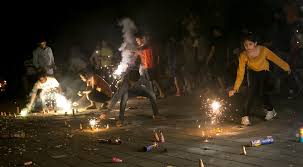 The Chhattisgarh Government has imposed a ban on the bursting of firecrackers in six of its cities, including the state capital Raipur, ahead of the wedding season from December 1st to January 31st. According to the statement issued by the State Environment Conservation Board, the decision has been taken to control the pollution, which increases during winters due to the direction of the wind.

Besides Raipur, other cities, which have been banned from bursting firecrackers, include Bilaspur, Bhilai, Durg, Raigarh and Korba.

Find More News Related to States in the News