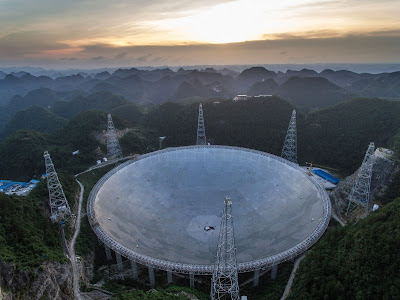 China, a communist nation in East Asia, has completed installation of the world’s largest telescope in Guizhou province. The 500 metre-diameter telescope covers an area larger than 30 football pitches. The telescope has overtaken the size of 300 metre-diameter Arecibo Observatory in Puerto Rico.

The largest-ever radio telescope completed installation as the last piece of 4,450 panels was fitted in the center of the big dish. The hoisting of the last triangular-shaped panel to the reflector began. Hundreds of Chinese witnessed the installation on Sunday in a karst valley in Pingtang County of the southwestern province of Guizhou.

The telescope is made up of 4,450 triangular-shaped panels. The five-hundred-metre Aperture spherical Radio Telescope (FAST) project began in the south-western province of Guizhou in 2011 and completed with a cost of 127 million Euros. The telescope would begin operations in September and will collect signals from the universe.

So let’s do:
1. Name the country, which has completes installation of world’ largest telescope named as ‘FAST’?
2. Expand the term FAST?