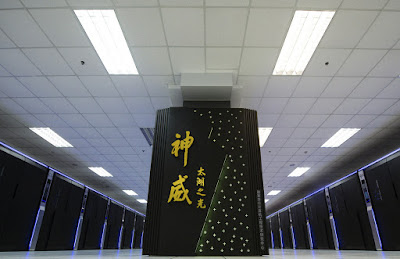 Chinese supercomputer Sunway TaihuLight with 93 petaflop/second speed was declared as the world’s fastest supercomputer. It was revealed in the TOP500 list of supercomputers released at the International Supercomputing Conference (ISC) in Frankfurt, Germany.

Sunway TaihuLight can perform 93 petaflop operations per second. It was developed by the National Research Center of Parallel Computer Engineering & Technology (NRCPC) and installed at the National Supercomputing Center in Wuxi. It displaced the Tianhe-2, an Intel-based Chinese supercomputer that has claimed the top spot on the previous six TOP500 lists. With 10649600 computing cores comprising 40960 nodes, is twice as fast and three times as efficient as Tianhe-2. Sunway TaihuLight demonstrates the significant progress that China has made in the domain of designing and manufacturing large-scale computation systems as it is completely based on homegrown processors. Other supercomputers in Top500 list.
So let’s do:

1. Expand the term NRCPC and ISC?
2. Name the supercomputer,  which was declared world’s fastest supercomputer?