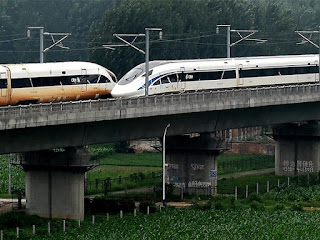 Two Chinese trains running at world-record speeds in opposite directions crossed each other on parallel tracks, in the latest feat achieved by China in high-speed rail. Bullet trains ‘Golden Phoenix’ and ‘Dolphin Blue’ passed each on parallel tracks at a striking speed of 420 km per hour in opposite direction setting a world record.
The record was achieved on the railway line between Zhengzhou in central China’s Henan Province and Xuzhou in east China’s Jiangsu Province. The experiment set a world-first for trains travelling at such speed, Zhou Li, head of the technological management department of China Railway Corporation. China has built over 16,000 kms of high-speed train tracks connecting most of the major cities.

So let’s do:
1. Name the train, which has set world-record of cross each other with speeds of 420 km/hour?