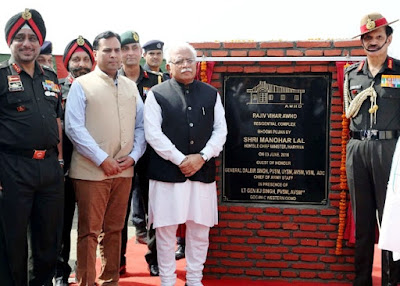 Chief Minister of Haryana, Manohar Lal Khattar laid the foundation stone of Jai Jawan Awas Yojna (JJAY), an initiative to provide affordable housing to serving and retired JCOs and Other Ranks at Bahadurgarh, Haryana. General Dalbir Singh, Chief of Army Staff was the Guest of Honour during the event.
The project is being executed by Army Welfare Housing Organization (AWHO) and aims to provide low-cost housing. This housing project has been named in the memory of Late Major Rajiv Joon, recipient of Ashok Chakra and Shaurya Chakra, who  had attained martyrdom fighting militants in Anantnag district of Jammu & Kashmir. On this occasion, his brother Paramjit Singh Joon was felicitated by the Chief Minister of Haryana.
So let’s do:
1. Who is the Chief minister of Haryana ?
2. Expand the term JJAY ?
Source – The Hindu