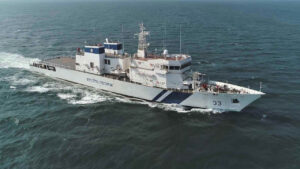 Chief of Army Staff General Bipin Rawat commissioned the Indian Coast Guard Ship Veera at a ceremony held at Naval Jetty at the dockyard at Vishakhapatnam, Andhra Pradesh. Veera, third in the series of offshore patrol vessels of the Coast Guard, was built by L&T at its shipbuilding facility at Kattupalli in Chennai.

L&T MD and CEO B Kannan stated that a ship of this class has been designed and constructed in India for the first time as part of ‘Make in India’ concept of the Central government.