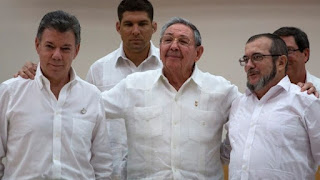 Colombia’s government and the country’s biggest rebel group reached a historic deal Wednesday evening for ending a half-century of hostilities in one of the world’s longest-running and bloodiest armed conflicts.
President Juan Manuel Santos hailed the agreement with the Revolutionary Armed Forces of Colombia as an opportunity to turn the page on decades of political violence that has claimed more than 220,000 lives and driven more than 5 million people from their homes.