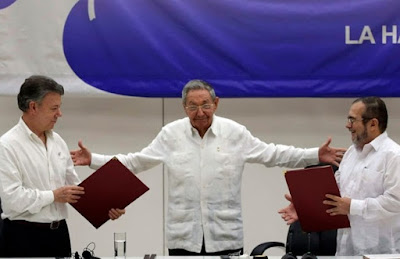 The Colombian government and FARC guerrillas have declared the final day of one of the world’s oldest wars with the signing of a ceasefire agreement to end more than 50 years of bloodshed.
The signing ceremony held at Havana was witnessed by Colombian president Juan Manuel Santos, FARC chief Timoleón Timochenko Jiménez, the UN secretary general, Ban Ki-moon, Cuban president, Raúl Castro and Venezuela’s head of state, Nicolás Maduro. The announcement is seen as one of the last steps before a full peace deal is signed, which is expected within weeks via a referendum. The formal peace talks for the deal were started three years ago, in October 2012, in the Cuban capital.