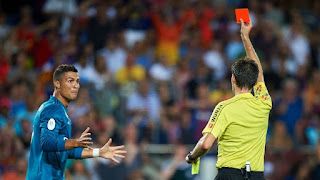 World Player of the Year, Cristiano Ronaldo was banned for five-match by the Spanish football federation. He has been banned for pushing the referee after being sent-off in Real Madrid’s 3-1 win over Barcelona in the First Leg of Spanish Super Cup.
Ronaldo received an automatic one-match ban for his dismissal and an extra four games for his reaction towards referee Ricardo de Burgos Bengoetxea. He has also been fined 4,500 US dollars and has 10 days to appeal the ban.
Important Takeaways from Above News-
Source- The Economic Times