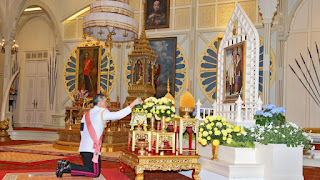 Thailand named its crown prince Maha Vajiralongkorn as its new king on 1 December 2016, 50 days after the passing of King Bhumibol Adulyadei. Dressed in white, prince Vajiralongkorn ascended the throne and accepted his new responsibilities at the invitation of the National Legislative Assembly’s (NLA) President in his Bangkok Palace amidst the whole of Thai media.
Source – Business Standard
×