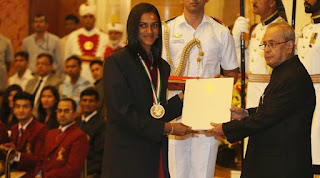 Country’s largest paramilitary force Central Reserve Police Force India (CRPF) has decided to appoint Olympic silver medalist PV Sindhu as it’s brand ambassador and bestow the honorary rank of Commandant on the ace badminton player.
A Commandant rank in the CRPF is equivalent to the position of a Superintendent of Police (SP) and such an officer commands a battalion of about 1,000 personnel, when posted in field operations. Pusarla Venkata Sindhu is an Indian professional badminton player. At the 2016 Summer Olympics, she became the first Indian woman to win an Olympic silver medal.

So let’s do:
1. CRPF has decided to appoint Olympic silver medallist _______ as it’s brand ambassador